Sometimes I whip up an amigurumi just for fun with no other purpose than to just hang out in my home until I can give it away or sell it.  (And sometimes I end up keeping them. I have a baby whale and a finished cupcake that adorn my home office that are too sweet to give up!)

Then sometimes there are those toys or items that are complete but are just a little….off. Sometimes the “offness” is only noticeable to me but sometimes it’s more noticeable.

(And other times, I make something and for whatever reason, maybe that crochet is an insanely competitive market? it doesn’t sell.) 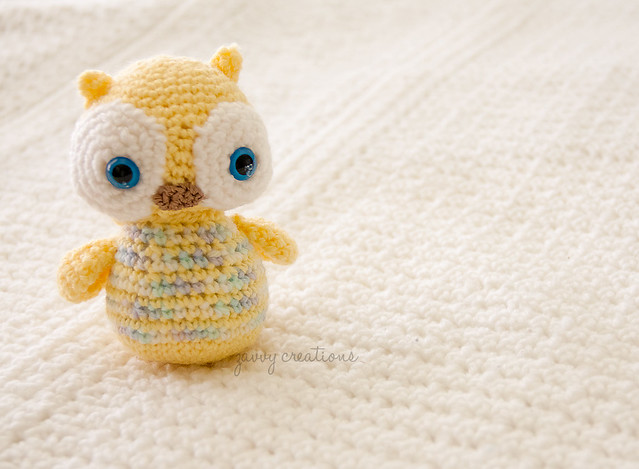 Designed by one of my favorite designers, Little Muggles, I had to try it. Even though there were nine separate parts to crochet, I liked how the soft pastel yarn looked with the baby yellow yarn. And those eyes!

Sadly, my inspired idea to give him blue eyes didn’t work out too well because the backs to the eyes took some extra oomph to fit. My husband had to use pliers and a lot of strength I do not possess to force the eye into the backing. Unfortunately, both eyes were scratched in the process. (Note to self: will not be purchasing from that supplier again.)

This little guy has sat in my little pile of growing “misfit toys” for a few months, waiting to be played with. He now bears the Irregular label and is sitting in my shop, waiting to see if someone wants to take him home.

Another example is this lop-eared baby bunny. It’s actually executed perfectly. Nothing is “wrong” with it except that the weight of the bunny is not evenly distributed, which happens, and so one of the hind legs comes up as the bunny rests on its front paws. It kind of looks like it’s in mid-jump. But since it doesn’t sit nicely, in it goes to the Misfit Toys bin.

The point is, because of these small irregularities, they shouldn’t render the toy useless. But to help entice others to adopt these little misfit creatures, I went ahead and created an Irregular section of my shop so I can pass on the savings and keep my closet from filling up with perfectly lovely adoptable creatures!

I’m a little giddy about this new section of my shop–I hope others are, too!