Last we spoke, I was struggling hardcore to finish a blanket. This thing took over six months of my life, once I had done the research and bought all the yarn, etc. Realistically, we’re talking nine months in total.

I became stuck when I had a stack of squares to finish with weaving in all the ends (I counted–almost 300 of them). Thankfully, I had woven some in as I went along, but the task was still daunting by the time I had to finish those up before moving on to joining.

That’s another chapter of the tale that I thought might make the whole blanket go down in flames. I had already started, frogged, and started over a Join-As-You-Go owl, with the extremely popular African flower motif pattern that Heidi Bears uses for her intricate designs.

I think that trying a JAYGO pattern before I had ever successfully done even a simple motif blanket was definitely putting the cart before the horse.

Fortunately, I had been inspired last year to purchase access to a wonderful class on Craftsy, called Joining Crochet Motifs with Edie Eckman, who is a fabulous teacher. If you have ever wanted to learn the intricacies of creating granny squares and want to know more than one way to join (and finish) a blanket, absolutely download that class! They go on sale pretty frequently and you get lifetime access. Just that one class has been a lifesaver for me, and in fact, it’s what helped me finish my blanket.

I had done some of the “homework” from the class last year, but needed a refresher. (The instructions on this particular pattern simply said “join by slip stitch,” which was not helpful at all. It assumes that one has already mastered joining squares together.) I simply went to the Slip Stitch Seam part of the class to get tips on what to do, and the joining up of the squares flew by so much faster than I thought it could. It still took me several hours on and off on a Sunday, but once the joining was finished, I was able to weave in the ends and focus on the border.

I put the blanket in a mesh laundry bag, threw it in the washer on gentle, and after laying it flat while it was damp, I put it in the dryer on low for about 20 minutes. It came out extra soft and cuddly, ready to wrap around some playful kids.

The blanket was sent off to my friends and they sent me some adorable photos of their kids goofing off with the blanket as the backdrop. A couple of them are below.

I couldn’t be happier with the end result, especially knowing my friends will get a lot of use out of this blanket for years to come! 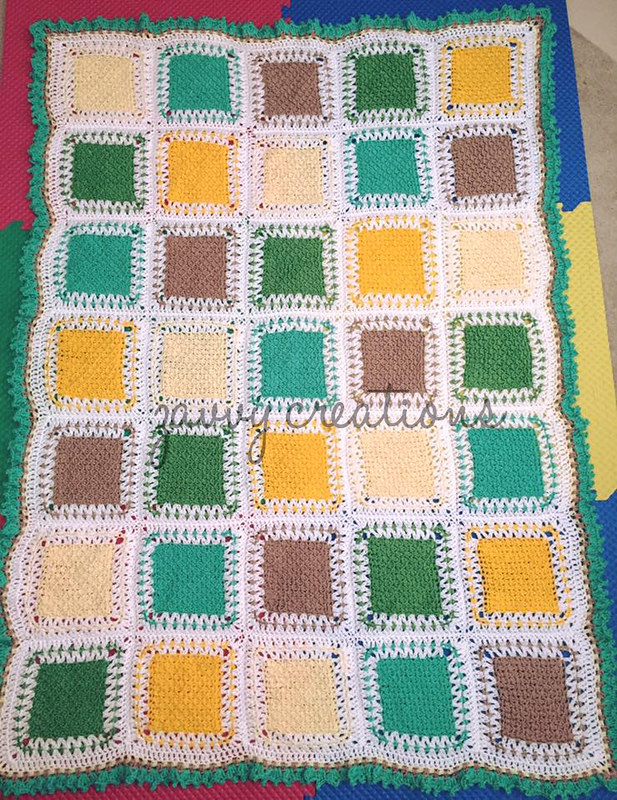