Not too long ago, I wrote about how I was trying my hand at Tunisian crochet. Still loving it, although I had to shelve it for a little bit while I worked on other projects and orders.

One of those other projects that I have been undertaking is learning different joining methods for motifs. Specifically, I wanted to become completely comfortable with JAYGO, or join-as-you-go.

I came across the designer and blogger Heidi Bears, who puts together the most beautiful patterns and dolls using the African Flower motif, and knew I had to make one of her designs. I pored through her patterns until I found one that looked reasonable and which she deemed a good one for beginners. (For the record, it is this one.)

After much research and planning, I bought a bunch of colors of sock yarn and I got started making the motifs. I read through the entire pattern and the perused her joining tutorials. I felt ready.

While it definitely took me a little while to get the hang of it, including double checking what I was doing with a YouTube video here and there, I eventually and successfully made my first series of joins. I was on my way! 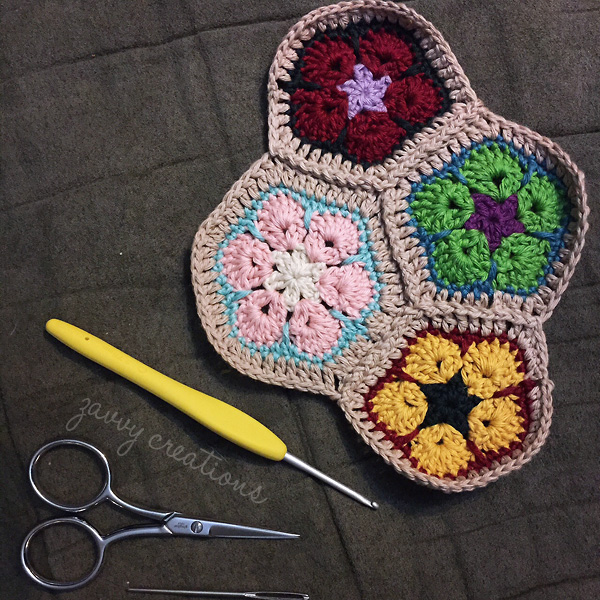 I carefully went through the pattern little by little, making the various required shapes and joining them. I found my groove and thought I would have this thing done before June was over, easily.

But my grandest project to date–my “Titanic,” if you will–struck a proverbial iceberg when I realized waaaaaaaaaaaaaay too late that I had joined one too many sides of a heptagon (7-sided shape).

I did my best to fix it; I thought I was being quite ingenious, even, for coming up with a workaround. Alas, it still wound up being a fail. I ended up with a lumpy body with the hole for the head being in the wrong place (not to mention having what looked like a dent sticking out of its backside).

I tried cutting just the joined yarn and saving the motifs but it was not to be borne. I was going to have to redo all of my motifs and start again.

There are some valuable lessons to be had, here, but I’m not gonna lie: it reeeeeally sucked to know I would have to repeat all of the motifs I had spent hours on already.

The two quasi silver linings I managed to dig up were: 1) I’ll get to re-order the motifs more strategically the second time around so that half the owl’s body isn’t half dark, half light. 2) When I went back to study the JAYGO method again, I learned that I may have been doing something slightly off with my join method and there may be a way to make it even flatter than it was the first time around.

In any case, some life events have recently caused me to set aside my Owl Redo but I will get back to it and you shall absolutely see the end result when I have conquered this thing. (Maybe this should be called the FAYGO method: Fail-As-You-Go.)

If you have tried your hand at one of these designs or any JAYGO method, I’d love to hear any tips or tricks you may have. This is definitely a work-in-progress, considering I just crashed and burned with my first attempt.

Before I deflated it and started all over *Taps playing*