Almost immediately after publishing my post about what to DO with some pretty yarn I had on hand and was aching to try out, inspiration struck when I came across a pattern for a Tunisian crochet ripple scarf. It was less of a “Eureka” than a “DUH” moment. Of course I should be making a Tunisian ripple scarf. To recap, the yarn in question is a beautiful angora and acrylic blend, so it has some stiffness mixed with softness to it, but also has some wisp. It is a fingering weight blend (weight class 2) but I thought it would work up nicely, and to my delight, it has!

It took me about ten rows or so to memorize the pattern completely and get comfortable with it, especially since I was still mastering the Tunisian Purl Stitch, and there is one purl stitch right in the center of each row. (If you’d like a great close-up tutorial, Stitch Diva Studios does a fantastic job of it.) It got easier and easier as I went along, though, and now I feel like I could purl all day long. One tip I have for anybody who wants to try their hand at this pattern is to make sure to loosely do the return pass for the first half of the scarf, and then tighten up as you finish. It will even it out better, as it has a tendency to curl on one side and look lopsided. I feel confident that some light blocking will also help stretch it out and get it more symmetrical looking. The recipient of my scarf still remains a secret but I know this person will love it! In the middle of making the scarf, as I am wont to do, I became impatient and wanted to whip out a project that I could quickly complete and give me that crowning sense of achievement. I decided on a Tunisian dishcloth in Tunisian Knit Stitch and it felt like it worked up so fast. In reality, it probably took me a couple of hours, but here is a shot of of the finished project, including single crochet border: 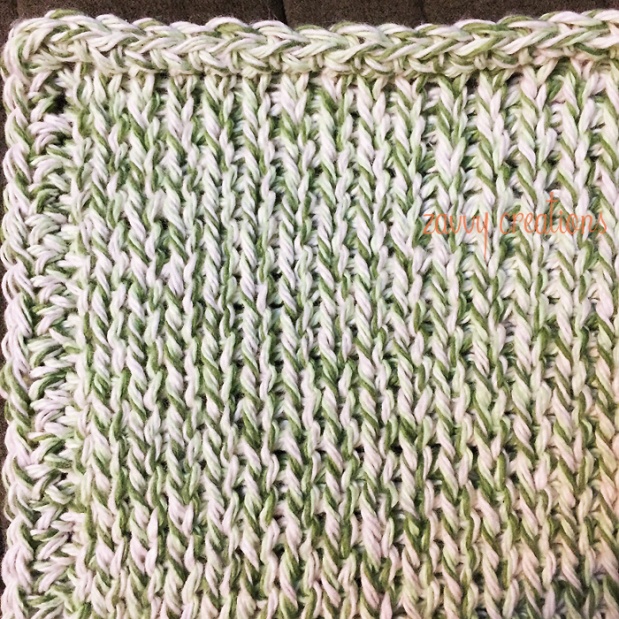 My husband and I were streaming some terrible movie (of my choosing) on Netflix and so it made this dishcloth go by all the faster, since I was focusing on it much more than the movie. I finished it off with a single crochet border and it sits in my sink as I write this.

Tunisian crochet has really turned out to be the “vacation from crochet” when I still want to create but don’t want to do single crochet in the round for hours on end, as in making amigurumi, or doing double crochet patterns, such as granny squares. I’m always in awe of how much there is to learn and do with this craft! Until next time, friends. Just keep hooking….just keep hooking….

Shot of the fully finished scarf

2 thoughts on “Inspiration and Then, A Dishcloth”